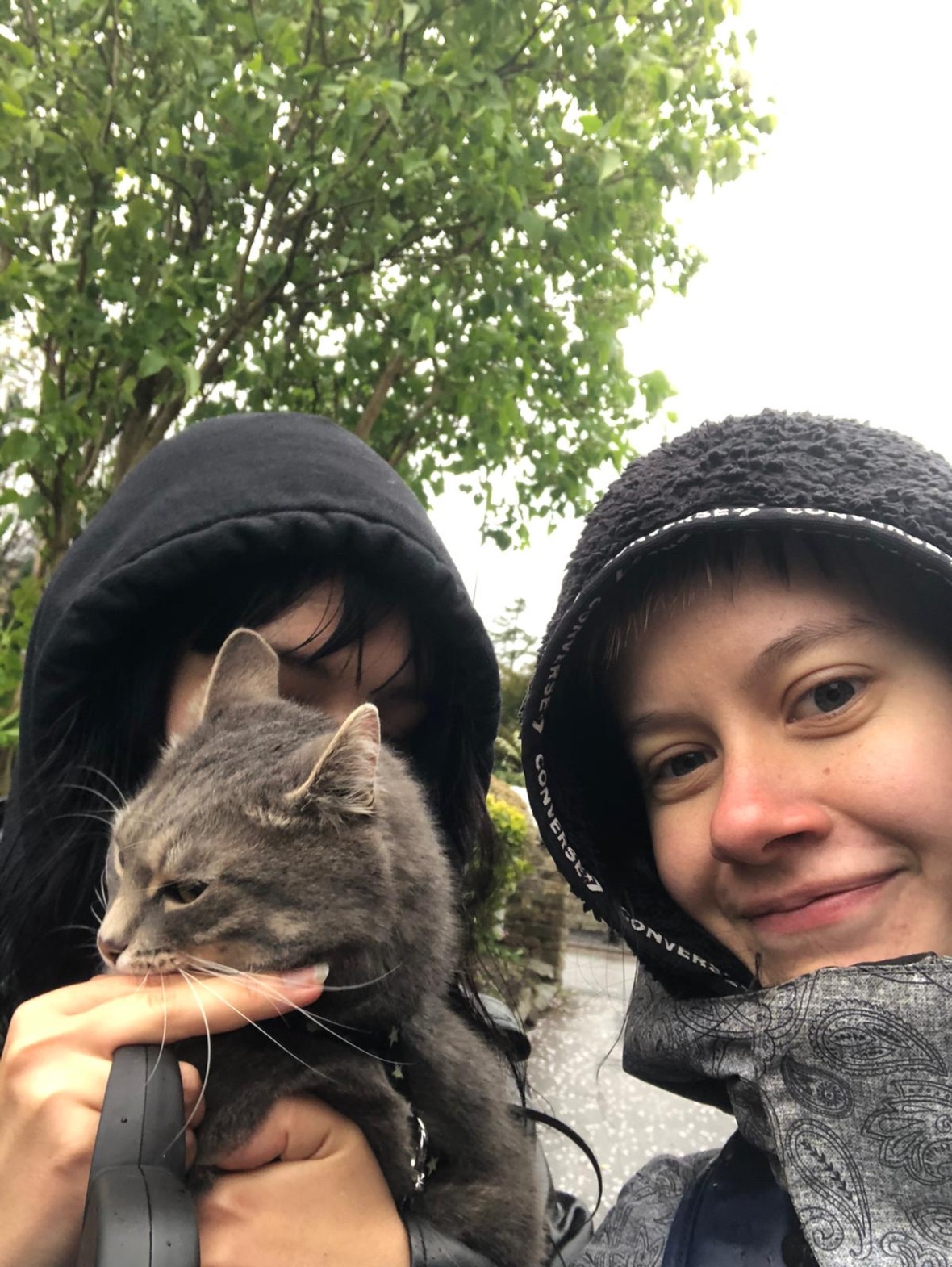 (Photo selfi with me, Lina and cat Karim)

I heard that animals react differently to different alters before, but I’ve never seen this myself.

And today Ayman’s cat Karim doesn’t recognize me at all.
It’s normal because he doesn’t know me. He only knows this body.

He knew Ayman since he was a baby. He knew some other alters – especially – Erik and Rumpel – well.
But I met Karim for the first time in my life. He just lives with our friends because we couldn’t keep him at flat (because flat is not ours). And we don’t have many opportunities to be with him because of lockdowns. So Karim couldn’t meet me before but I was sure that he just recognized the body and it would be ok for him.
But when he saw me – he just became scared. He has never reacted like that to Ayman or Eric or Rumpel.
Because for him I was a stranger.
And after that Abu Umar came. Karim suddenly stopped twisting. He recognized Abu Umar’s voice, movement, he recognized Abu Umar, despite that he didn’t see him for three years (Abu Umar never spent much time with Karim, not like Erik, but whatever).
Karim remembers Abu Umar and likes him.

And when I started to front again… well, Karim stopped to recognize this body and started to behave like he doesn’t know us.

So animals really feel that different alters are different peoples. They see that we are unique. Unlike some ableistic people.
And this experience was especially important for me. Pity that cat doesn’t recognize me, but it helps me to recognize myself. Most of the time I feel like I’m not real, like I don’t know who I am. But after even a cat recognizes that I am me… well, it helps a little.
-Abu Hamza.

Our Littles tell about themselves!

Interview with kids of the System: Mowgli and Liza

When I say that I don’t believe in pathological paradigm in DID/OSDD/Autism context, it doesn’t meant that:

I didn’t realize that this paradigm is dominated in our society. On the contrary: I see that and this is why I’m speaking against it.

That I believe that Autistic or Multiplicity are not disabilities. On the contrary, I’ve more often seen people who support pathological paradigms say so. But disability is not about disease. It’s about society.

That I don’t believe that mental health problems or neurological disease exist. No, no, no. I have OCD and PTSD and this is a huge problem. I wanted to be cured from it. But it does mean that I wanted to be a singlet allist!

That I use only a social model of disability. No (again). I use social models in activism, but I use a medical model with my doctor. Social model is about society. Medical model is about health. If you need to improve society and create inclusion, it doesn’t mean that I don’t have to find a cure for some nasty stuff like OCD and depression. Even if OCD or depression could be a disability. Some disabilities are disease (like OCD and depression). Some – like Autism and Multiplisity-are not.

This is the point.

There is no right or wrong way to switch.

You could notice some switching. And you couldn’t notice others.

After some switching you could have a strong headache. And some can be not just painless, but pleasant.

Some switching you could plan or predict. Others are completely surprising for you.

It depends on many factors: System’s individual qualities, alters personal qualities, your relationship with a particular alter, what caused switching, how deeply and unpredictably you were triggered, are you ready for switching or not, how many times you spend in co-con. Even your current physical and psychological condition.

But anyway, there is no such thing as a normative for switching.

There are many ways to switch.

And any way that is comfortable for you is a good way to switch.

We don’t want to make a video about DissociaDID, even when we know that folks want to know what other System’s think about this channel.

Well, we just didn’t want to support cyber bullying. And we really grateful DissociaDID for some great stuff that they did: they were the first DID channel that we was watching and they helped us when we started to realize that we are a System.

But at the same time we understand that they have some problems dealing with their own problems, pathological stereotypes and stuff like that. And because they are so popular and influential we decided to speak about it.

A little bit of support for Systems.

If you have Littles in your System and sometimes behave in a “childish” way it’s ok.

If your Littles have atypical interests, if they are not like “normal kids”, it’s ok. Kids – it doesn’t matter if we are speaking about alters or singlets – have their rights not to fit in ageistic stereotypes about “normal kids” and have “childish interests”.

If you are afraid to look like a person with developmental disabilities because of your Littles and feel shame about it, the problem with ableists around you, not with your Littles.

If your Littles couldn’t do anything that other folks in your system could, don’t worry- it’s fine. All System’s members have different skills, including children. Just give them their time and don’t force them.

If you couldn’t manage to make good communication with your Littles, it’s ok. Gave yourself your time, be patient and maybe ask

for help from specialists.

And anyway, just remember: you are not worse than other people because you have Littles in your System.

This is not “wrong” or “shameful” itself.

And Littles are often really beautiful and cool and unik – you just get to know them better.

(Me walking on the street. I have a leather yellow jacked and blue jeans. On the backward is blossoming tree and ordinary Sheffield houses)

About foreign fighting in Donetsk 2014.

From the perspective of a person who lived there. I’m not a specialist on Ukrainian conflict. Only a dude who was born in Donetsk and lived there from my birth in 1995. My fam was in the city at the beginning of conflict when first talking about foreign fighters.

It was in the spring. I was in a tricky situation. Most of my friends support Ukraine, my fam and folks from my uni support Russia. I hate both sides of the conflict.

Ukrainian government forbade the Russian 1 channel (the main Russian federal channel) that made it extremely popular among the population.

More popular than before.

This is why I’m against the prohibition of any propaganda, btw.

On this channel Russian tried to scare us that American would send Blackwater soldiers in Ukraine. We were scared. Because all knows that Blackwater tortured people.

I didn’t check this news. I feel too exhausted.

There was a time when tanks drove along the roads, battles were fought in the suburbs, and military aircraft were already flying over the city. We were not afraid of bombs. we were afraid that they would collapse. They were really old.

City administration was captured by Donetsk pro-Russian militia. They have this silly tire barrier around it. If someone would burn tires they would all suffocate inside the building.

But one day Kadyrov’s people came. Kadyrov is a pro-Putin leader of Chechnya. Deeply authoritarian (Stalin style of ruling). Chechnya is occupied by Russia and Kadyrov’s controlled everything there. So this was pro-Russian, pro-Putin’s people. They helped Donetsk Republic’s militia to dismantle the tire barrier and build a new one. I personally saw it. it was clear that these people were militarily trained. Everyone knew that Kadyrov sent them. But at the same time, Kadyrov denied his participation in all of this.

Population was scared not because this people was Kadyrov’s military, but because they were Muslim.

It was really unpleasant for me because I alredy hated Islamophobia even if I wasn’t Muslim myself.

But I believed that Kadyrov’s people was radical Muslim, not a pro-Russian traditionalist like they really were. Just because everyone said it. And I used to believe people. And I knew very little about Chechen war and Russian culture at that time.

Also we were hearing that some guys from Europe could come and fight.

And some neo-nazi from Western Ukraine. They weren’t actually “fouring fighters” but they were fouring enough for us, because West and East of Ukraine are very different. We were especially scared because we heard that they are extremely antisemitism and I’m partly Jewish and have a strong Jewish identity.

When lately I found out that people from Europe who was fighting in Ukraine and “Donetsk republic” (on both side) are really Nazi I wasn’t surprised at all. Because all this conflict – no, all Ukrainian and Russian culture- was deeply about supremacy.

And the only good thing about this conflict with all this war and double-standards and hatred was that we finally could run away from Ukraine.

So now all this lies and all this relatives and acquaintances who literally made a journey from not-interested-in-politics folks to highly-politicised-bigots during one month… All of that is not our problem any more.

Even Syria means more to us than Ukraine.

Please stop behaving like we need to love Ukraine or Donetsk just because we have Ukrainian passport.

Have a good day!

(Me, sitting on the stone)

Do you know that your neighbor is not like Barack Obama even if he is Black?

Or that your granny is not like Queen Elizabeth, despite the fact that both of them are old ladies?

Or that Muslim girl from your school is not Malala Yousafzai?

I hope you know it.

Black, women and Muslim are stigmatized but they are different.

And there is the news (unfortunately for many folks it’s really The News):

Yeah, I mean Autistic people, bipolar people, folks with ADHD, people with dyslexia and dyspraxia, Plural systems and so on and so forth…

So, yeah, I’m Autistic and I’m not like your child.

Or Ari Neeman. Or someone else. I’m just like me.

And I’m tired, tired, tired of you trying to compare me with other Autistic folks like we need to be clon army just because we are Autistic.

The same with Multiplicity. My System is not like DissociaDID, we are not like Multiplicity and Me and we are certainly not like Kevin from “Split”

movie (because Kevin is really crappy and unrealistic representation, so no one is like Kevin!)

It’s so odd that I have to tell you in 2021 that literally only people are different – in any stigmatized or non-stigmatized group – even if their brains work in a “weird” way.

We don’t know why the topic about “Autistic aggression” is so popular, because most Autistic people are not violent at all.

But whatever, we decided to make a video about it. And about the reasons for “Autistic aggression”.

About naivety and age

Ok, the former leader of Islamic State Abu Bakr al-Baghdadi believed that he seriously weakened American international influences. And most IS guys still believed that their state would rule all of the Middle East (and even participate in the final battle with “crusaders”).

Russian President Vladimir Putin believe that in same sex marrige people physically couldn’t have children. The majority Russian people still believe that if you are a Patriot you shouldn’t criticize your government.

Former American president Donald Trump believed that climate change does not exist. And some of Trump’s supporters believed that he is a Messiah.

And after that you are laughing at kids who believe in Santa Clause and fairies or thinking that nativity is a thing that is intrinsic mainly to children?

You are free to share, translate and copy any material from this blog if only you gave link to the source. But you couldn’t monetize my materials without my permishion.